Without a doubt, many people rely on coffee for their morning ‘wake up call’. Even healthy people who eat right, and are food conscious, drinks coffee once in a while. It is perfectly fine to indulge in coffee

occasionally, but what is worrying though, are people who drinks coffee everyday, and at least three times a day. If you look up the internet you’ll find websites listing mostly benefits of coffee, and that is puzzling because coffee is far from beneficial. There may be some truth in those beneficial claims but more than often, the beneficial gains of coffee to the ratio of negative effects is 1:9. It doesn’t help that the media seems to associate coffee with a ‘hip’ or ‘cool’ lifestyle especially in television dramas for teens, with actors casually mentioning grabbing cups of coffee anytime of the day.

Recent research also showed that coffee is just a placebo for people reliant on their daily coffee fix and does not increase attention span and concentration. Regular consumers of coffee feel the effects of heightened alertness from coffee due to the chronic fatigue they suffer, and what the coffee does is merely masking that fatigue they are feeling for as long as the effects last.

Coffee is also known to increase norepinephrine production, which is a stress hormone, and can cause palpitations, leading to a rise in blood pressure resulting in anxiety. This explains that ‘perk’ you feel that makes you think you’re awake after drinking that cup of coffee first thing in the morning. When the effect wears off, you long for another cup of coffee, thus developing a mental and physical dependency towards it.

Caffeine is not only diuretic, causing your body to dehydrate faster if you don’t drink enough liquids that is not coffee, it also has a taxing effect on your liver which metabolizes it. If consumed over a long periods of time, it will cause your liver to be overworked and slow down the ability to burn fats and cleanse the other toxins in your body.

Because coffee is acidic, when taken too much or on an empty stomach, can disrupt digestion in your stomach and then speeding up the passage of waste in the intestines, causing a sudden laxative effect. Such acidity are main contributors of ulcers of any kind and also heart burn for those who are more prone to digestive problems.

Instead of relying on coffee to give you a temporary boost that actually takes a toll on your body, I’d say try being alert and awake the Jack Lalanne way as he advises on how to stop being so tired all the time. Simple and common sense advice, but sadly, not many people follow.

Are you still going to pick up that cup of coffee after reading this?

Many of us are no longer living ‘naturally’ in today’s modern times. While we can be ‘natural’ by eating fresh, real foods that are grown from the earth, there are many things about life today that is far from natural. Living in such an un-natural world definitely deprived humans of many things, and one of those things is happiness. When you think of the word ‘happiness’, many things comes to mind. Because of how our mentality has changed over the decades, ‘happiness’ means different things to different people.

What is important is that you find what are the things that make you happy without having to sacrifice another. Real happiness should, and will, never come at the expense of another important thing. I find that the way instant gratification is being glorified in our entertainment and media industry nowadays, it blurs the line between a want and a need, and the end result is usually stress or worry.

Watch this video by Jack Lalanne, as he talks about how we should not only eat healthy but be happy as a person to live a good life. This video is in black and white, yet, the message is the same and applicable to modern times today. It’s quite sad to know that people didn’t change much from the times of when television was still in black and white till now, when television is in 3D and HD.

We all know too much sugar is bad for you. But do you know how bad it is for you? Most of our daily intake of sugar exceeds the daily requirement just by the afternoon. Sugar is in your cereal, your flavored milk, your coffee and tea, your food sauce, your pie, your cookie, dessert and the list goes on. In fact, a video on CBSNews website says, the sugar intake required for a day can be found in just half a can of soda.

According to this article, consuming too much sugar has proved to reduce the production of a brain chemical known as Brain-derived-neurotrophic factor (BDNF). With BDNF levels reduced, it contributes to insulin resistance which leads to diabetes and a host of other problems. Low BDNF levels are also linked to depression and dementia. And guess what? Chronic intake of sugar actually makes your brain unable to tell your body to stop eating, which is the reason for your sweet cravings. 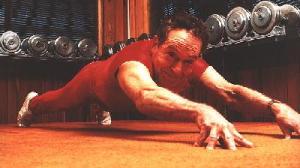 Eating too much sugar is common sense  and everyone knows it. But to actually stop it and make a healthy change in your life is another issue. These knowledge are not newfound studies and research that are only reported recently. Jack Lalanne, was an advocate of eating and living healthy, and used his life as the best example to show the world that it works. He died at age 96 and was probably fitter than anyone in their 20s. The only regret is not knowing about him earlier or I would have bought a ticket and flown to meet this man in person.

Jack Lalanne knew from the start that people are consuming sugar way more than what the body needs and by doing so, we are slowly eating ourselves to death. Watch the video below as Jack Lalanne explains and gives a lecture on ‘sugarholics’. Bear in mind that this is a black and white video and the sad fact is that this video is even more relevant to the way people live today. It is unfortunate that with all the advancement in technology and economy nowadays and we don’t even know how to eat to treat our body right. Guess wisdom really does not come with age.

Copyrights and Fair Use Rights

All products and/or food mentioned and reviewed here are bought by myself unless mentioned otherwise. This site acts only as a guide to living and eating healthy. Always consult your physician if you are on a strict, specific diet. Products and methods that work for me may not work for everyone. Always follow suggestions given on this site based on your own health needs and remember to be smart about your own actions.
Green Holistic Living© copyright 2012 – All Rights Reserved